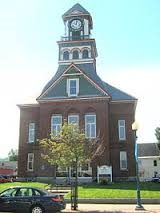 Orleans County is one of the four northernmost counties in Vermont . It has the largest area of the three counties comprising the Northeast Kingdom and lies between the eastern and western ranges of the Green Mountains .

The county is mainly drained by four river systems: the Barton , the Black , the Clyde and the Missisquoi River and contains more ponds than any other county in the state. It also contains three state forests: Hazen's Notch, Jay, and Willoughby

Many of the county's retail shops are concentrated both in downtown Newport and along the Newport-Derby Road (( U.S. Route 5 and Vermont Route 105 ), one of the two state-maintained roads connecting Newport city to Interstate 91. The villages of Barton and Orleans also have a smaller concentration of stores. The county is tied for first place in Vermont with the highest percentage of second home ownership

Save your favorite listings, and receive customized listing updates that match your interests.